If you want to maximize your competitiveness in powerlifting or weightlifting, at what age should you anticipate being at the peak of your prowess? It seems that weightlifting is a young person’s game, but many powerlifters are still improving well into their 30s (or even 40s).

After genetics, training age may be the most important factor explaining strength differences between individuals. However, biological age clearly plays a role as well. For every sport, there’s an age at which the best of the best are the most competitive. You don’t see many basketball players or footballers dominating in their 40s, after all. So, what is the prime age for strength sports?

A recent study examined competition results in world championships and the Olympics and found that world-class weightlifters tend to peak at around 26 years old, while powerlifters peak around 35. The standard deviation was also wider for powerlifters (7 years) than weightlifters (3 years), giving powerlifters a wider competitive window. These differences may be driven by several factors, including the age at which people begin training for each sport, the different physical requirements of the sports, and possibly changes in equipment over time.

The purpose of this study was to identify the age of peak performance in elite weightlifters and powerlifters, as well as the magnitude of the performance improvement in the preceding years.

No hypotheses were stated.

This was retrospective research, meaning the authors analyzed data that already existed, instead of actually recruiting subjects and running a study. As such, the “subjects” were everyone who had competed in the IPF powerlifting single ply world championships between 2003-2017, and the IWF weightlifting world championships or Olympics between 1998-2017, totaling 4385 competitors.

The authors made an interesting decision when determining each athlete’s age of peak performance. Personally, I would have just recorded their age when they hit their highest total. Instead, the authors fit a quadratic curve to each of the athletes’ performance trends over time, with the assumption that peak performance occurred at the top of the curve. An example is provided below as Figure 1. As such, only the athletes with at least three world championship appearances could be analyzed. This was a somewhat odd choice, in my opinion, but as we’ll see, it probably didn’t matter a whole lot. 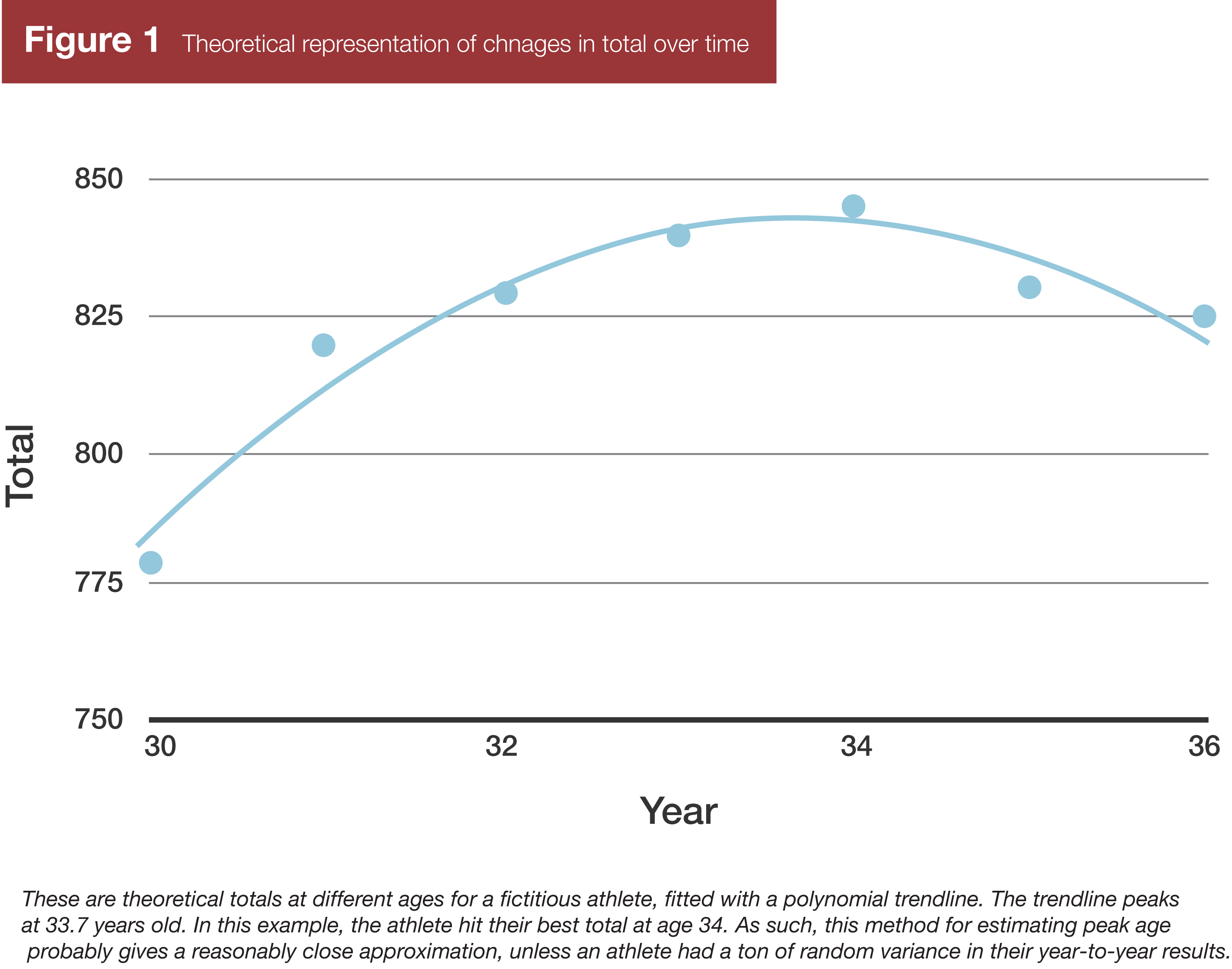 Peak age was 35 ± 7 for powerlifters and 26 ± 3 for weightlifters. That 9-year gap was a statistically significant difference. Within each sport, peak age for all three powerlifts was similar, as was the peak age for both the snatch and clean and jerk for weightlifters. The study provides a couple of tables of peak age for all lifts, all weight classes, and both sexes, which you can see below in Tables 1 and 2. Personally, I think it’s more granular than is useful, but it’s here if you’re interested. 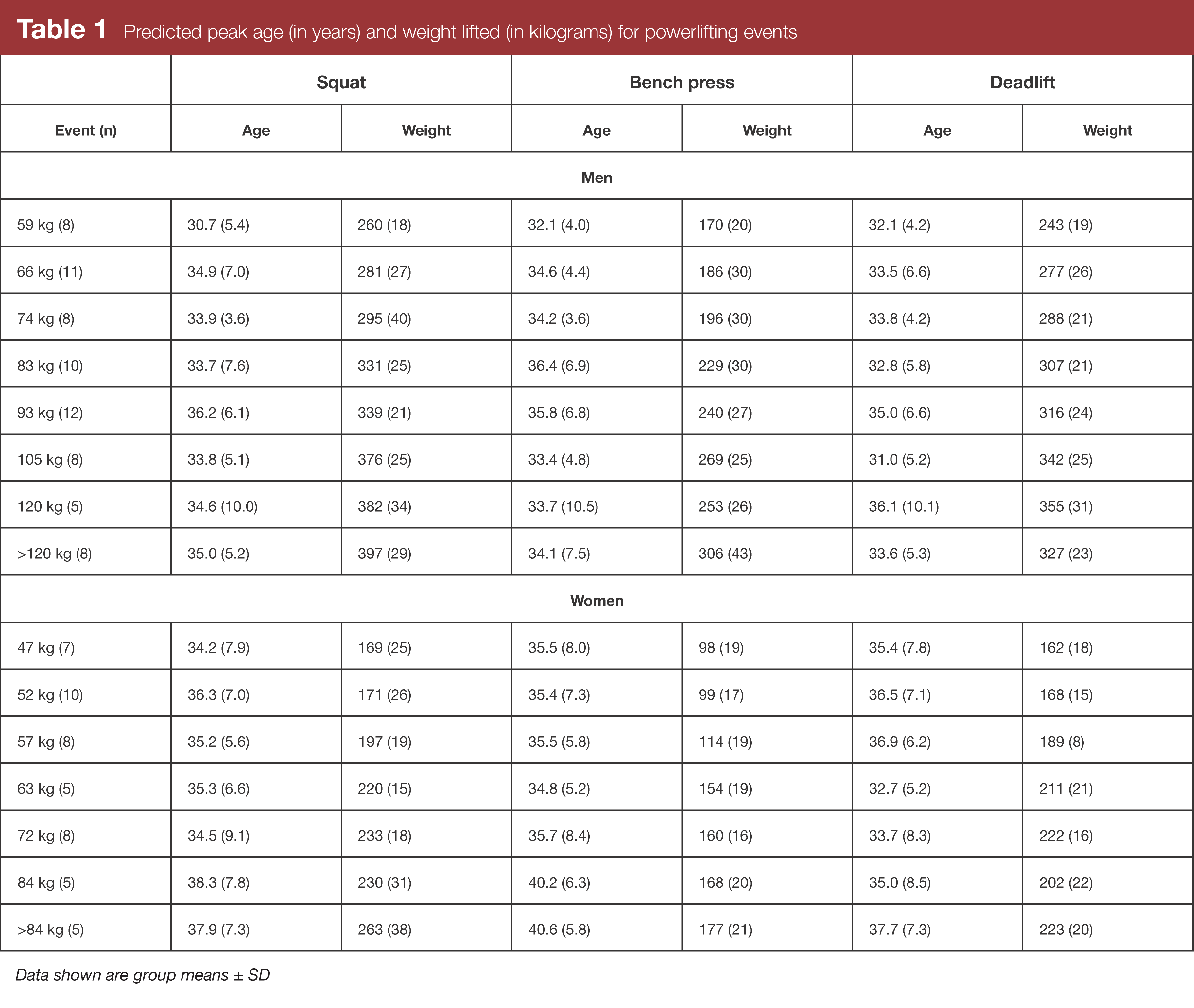 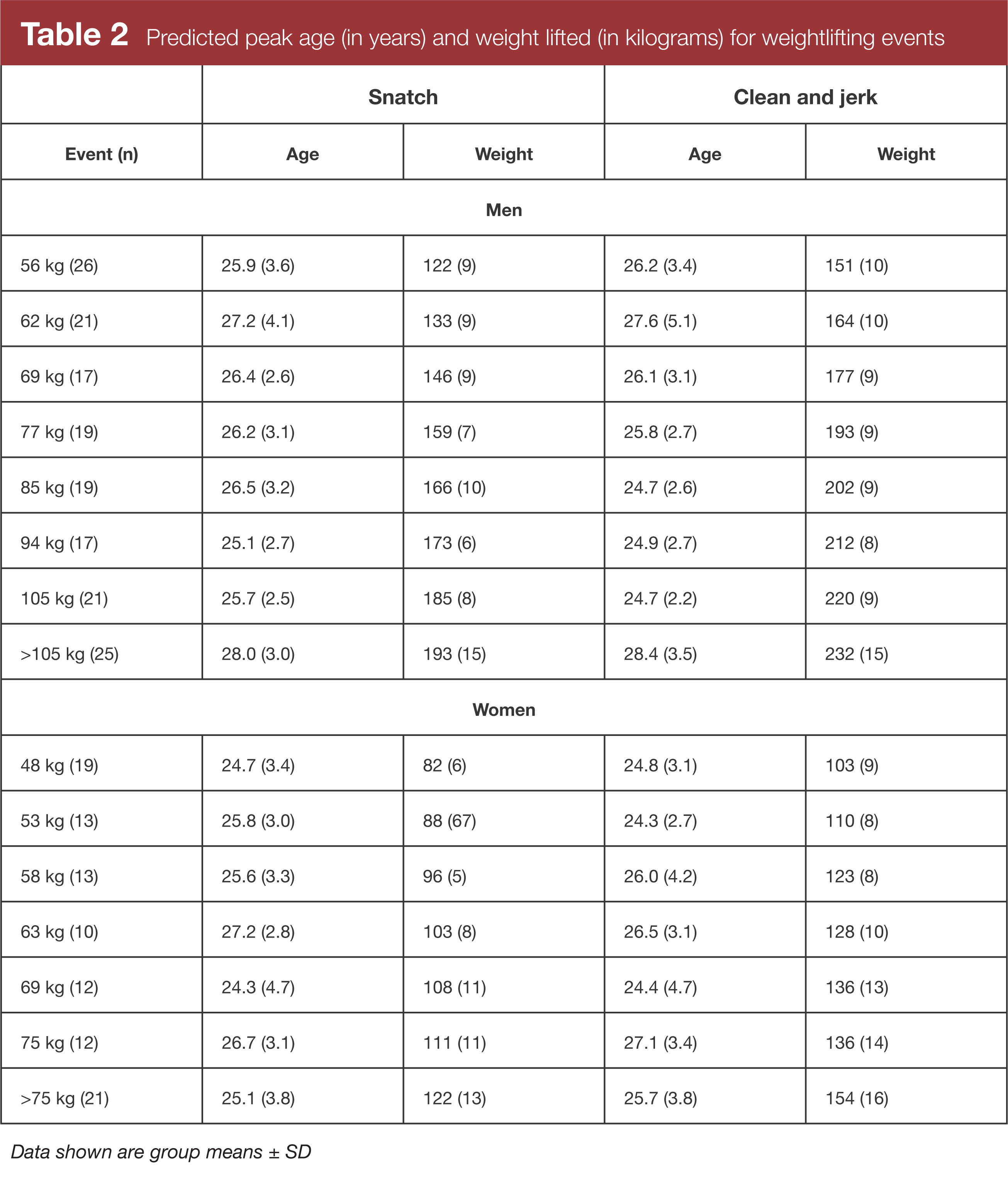 In weightlifting, peak age was slightly younger for medalists than non-medalists, though the difference wasn’t significant for powerlifting. Peak age was slightly older for males in weightlifting and for females in powerlifting. All of those differences were pretty small (<1.5 years) and likely not meaningful; when you have almost 4500 subjects, just about everything will be statistically significant. 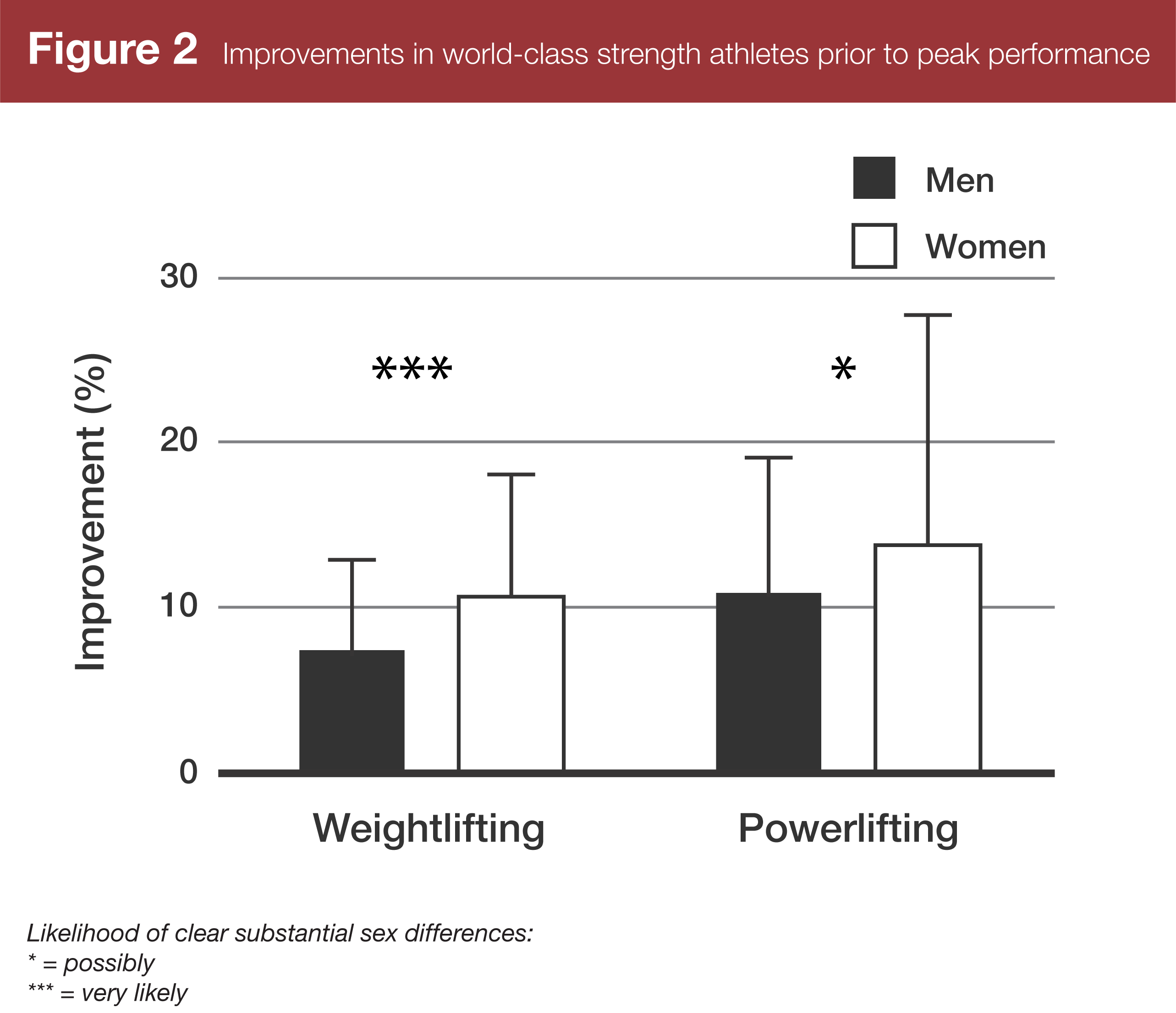 This was a neat article that confirms what strength sport fans have known for a long time, or at least strongly suspected: Weightlifting is a young person’s game, while powerlifters can improve much deeper into their careers than athletes in most other sports.

On the surface, powerlifting and weightlifting look like pretty similar sports, but the make-or-break factors in elite competition separate them. Namely, in powerlifting, you’re not penalized (much) by being slow. In weightlifting, on the other hand, speed is the name of the game. If you can still produce just as much force, but you can’t generate as high of velocities at the end of your second pull, or you can’t drop under the bar as fast to receive a clean or snatch, or you can’t generate as much power in the blink of an eye on your jerk drive, your performance suffers. In powerlifting, on the other hand, generating higher velocities right out of the hole on a squat could theoretically give you a little more leeway when grinding out a max, but the overall impact is MUCH smaller; there have always been successful powerlifters who don’t move the bar particularly fast. That distinction helps explain why weightlifters peak at a younger age than powerlifters: The ability to generate velocity and power drop off faster due to age than the ability to generate force (2, 3). There are a couple of reasons for this: the elastin content of tendons decreases (which decreases the efficiency of the stretch shortening cycle), and neural impulses travel at a slightly slower speed (which decreases active rate of force development; 4). So, while trained lifters can still add muscle mass and increase their force output into their 30s or even 40s, power output and velocity are much more subject to the aging process, and continued training can only slow down their decline.

However, I don’t know that the differences between the sports can be chalked up solely to physiology. Weightlifting is also a much more competitive sport worldwide. Most powerlifters don’t start training for powerlifting until high school at the earliest, whereas internationally competitive weightlifting programs begin developing weightlifters from a very young age. Thus, the training age of a 26-year-old internationally competitive weightlifter is, on average, much higher than a 26-year-old internationally competitive powerlifter. The present study (1) had no way of accounting for training age, but I strongly suspect that it’s an important factor. If powerlifters started training for powerlifting at the same age that weightlifters start training for weightlifting, it’s possible that we’d discover that the physiological peak age for powerlifting is, say, 30 years old rather than 35. Maybe the average 30-year-old powerlifter simply isn’t at an advanced enough training age to be at peak performance, and so they wind up peaking in the sport a few years after they “should” have peaked physiologically.

One final factor to consider is that this study examined world-class single ply powerlifters. Since the resurgence of raw lifting is a relatively recent phenomenon, the authors had to focus in on single ply competition in order to have enough years of data to analyze. During the time period the authors analyzed, it’s my understanding that single ply, IPF-approved powerlifting gear has improved considerably. Thus, it’s possible that a fair amount of the lifters in the sample put up their best totals a few years after their actual strength peaked, as improved equipment allowed them to keep improving their competition numbers.

When considering the effects of lifting gear and training age, I think we can firmly conclude that weightlifters do likely reach their peak in the sport younger than powerlifters do, but I think the average of 35 years old for powerlifters is a little higher than it “should” be. In other words, that may have been the average age at which the lifters in their sample actually attained their best performance, but I’m not fully convinced that it’s actually the “optimal” age for powerlifters.

I want to make one thing clear, however: Just because internationally competitive weightlifters peak at 26 and internationally competitive powerlifters peak at 35, on average, you shouldn’t assume that’s when you’ll peak. I carried out an analysis of powerlifting meet results last year (on all raw competitors, not just internationally competitive lifters) and found that people of all ages are still making gains, on average. Now, there’s clearly some self-selection bias – lifters who started competing in their 20s don’t keep getting stronger into their 70s, after all. It’s more likely that people simply stop competing (or competing as often) once their strength starts waning. However, of the people who do compete in powerlifting, we can see that the median rate of progress is positive well into the Masters divisions (40 years old and above). One common fear I hear from middle-aged folks who start lifting is that the progress they’ll be able to make may be very modest on account of their age. The data don’t really bear that out. While it’s true that people in their teens and early 20s make progress at a faster rate than Masters and Submasters athletes, median rates of progress only drop by about 50% between 30 and 60 years old (Figure 3). So, if you’re just getting into lifting in your 40s or 50s, your rate of progress may not be quite as fast as someone in their late 20s or early 30s, but on the flip side, new lifters in their late 20s or early 30s can generally make a LOT of progress pretty quickly. You’ll probably also be able to make very substantial progress, just at a somewhat slower rate. 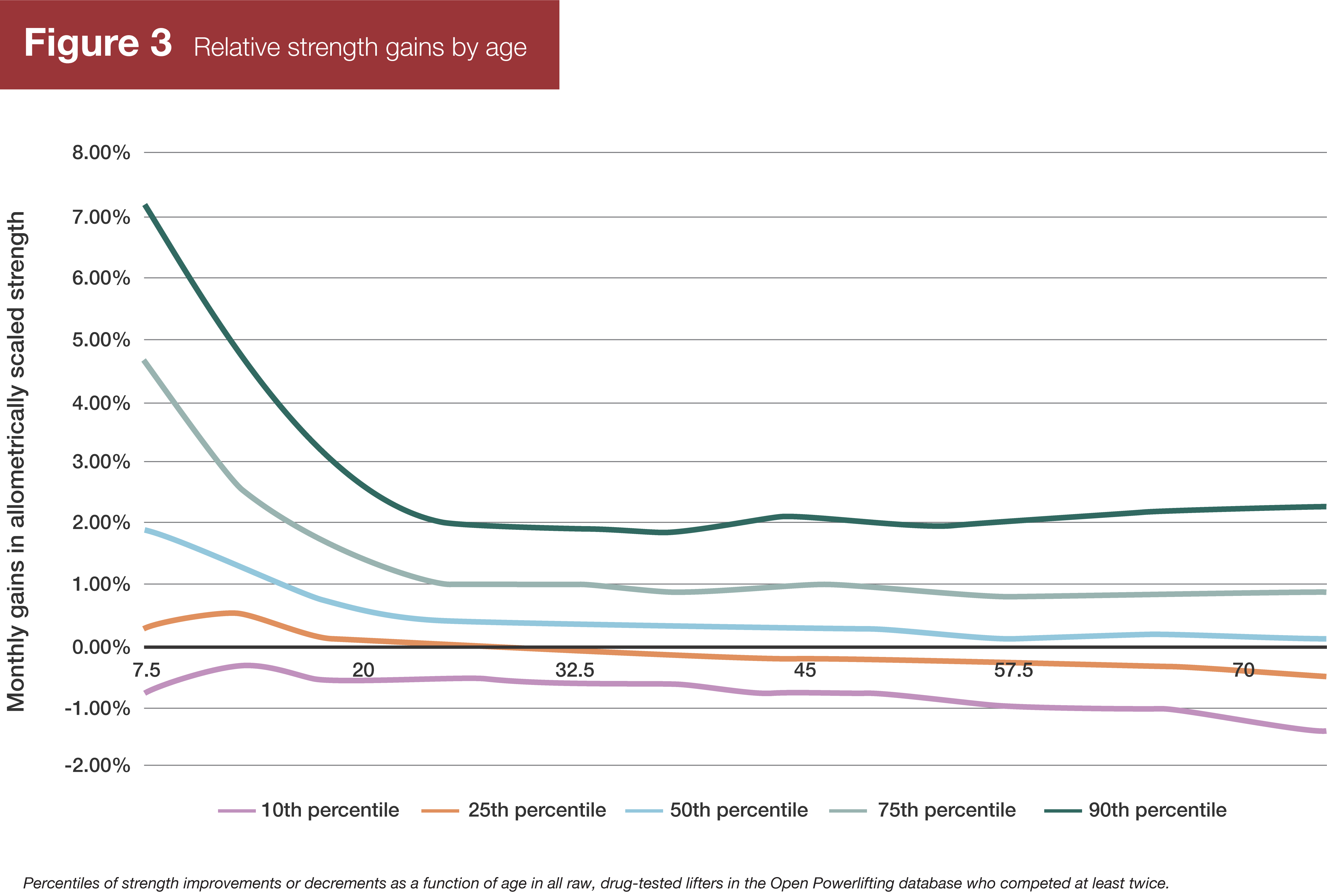 There’s one more observation I’d like to bring your attention to: The female lifters in this sample made more progress (on a percentage basis) than the male lifters in the five years prior to peak performance. That matches trends I’ve noted in both the published literature (mostly in studies on untrained lifters) and in powerlifters more generally (not just world-class lifters): On a relative basis, female lifters seem to progress faster than male lifters. I’ll be honest: I’m not sure why that’s the case. In untrained lifters, differences in starting points could certainly play a role (i.e. “untrained” female lifters may be more untrained, relatively speaking, than “untrained” male lifters, perhaps due to differences in sport participation or jobs involving manual labor). However, I’d assume that any of those baseline differences would be washed out by the time people felt sufficiently trained to step on a powerlifting platform, and certainly before they became world-class lifters. I’m really not sure why relative rates of strength progress would be higher in females than males, but it’s an observation that’s shown up several times now, in lifters ranging from untrained to internationally competitive. I hope we see some future research on physiological factors underpinning this observation. 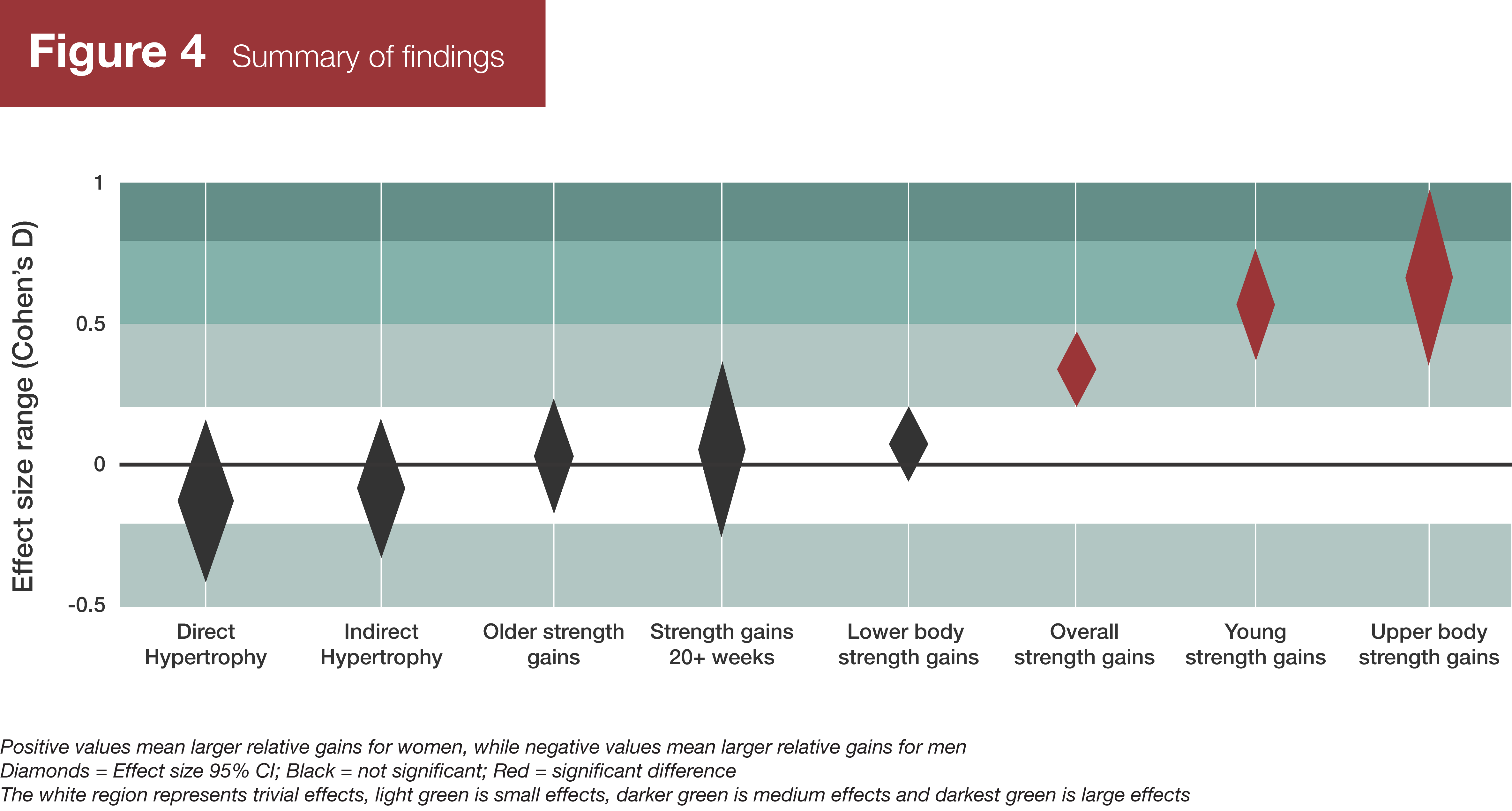 In general, I’d just like to see a repeat of this study in 10 years with raw lifters used as the powerlifting sample. The sport is growing so much, and more youth lifters are getting into powerlifting, so I’ll be interested to see if peak age stays in the mid-30s, or if it trends a bit younger over time.

For both powerlifting and weightlifting, getting into the sport at an early age can help ensure that your competitive peak can coincide with your physiological peak. However, if you don’t have a time machine, you can still improve powerlifting performance (and, more generally, the ability to build muscle and increase your capacity to generate force) well into your 30s and beyond. Time catches up with everyone eventually, but the impact of aging on force generation starts later and proceeds more gradually than the impact of aging on velocity and power generation.