Pushing It to the Limit: Gauging How Far We Are From Failure

The researchers set out to measure the accuracy of estimating how many repetitions in reserve (RIR) can be performed before reaching failure. They also set out to determine if accuracy of estimating RIR was influenced by training experience, exercise performed, or sex. Participants performed multiple sets (up to 10) with 70% 1RM on chest press and 80% 1RM on leg press. After completing 10 repetitions, participants verbally stated RIR, then immediately continued performing repetitions until failure to compare estimated versus actual RIR. When combining outcomes of both lifts, mean estimated RIR was off by about 1 from actual RIR, when there were 0 to 5 actual RIR remaining. However, when actual RIR was 7 to 10, estimated RIR were off by more than 2. Comparing chest press to leg press, the average error in estimated RIR was less than 1 repetition for chest press when actual RIR was 0 to 5. However, for the leg press, this was only true when actual RIR was 0 to 3. Males were more accurate at assessing RIR than females during leg press only. Training experience did not impact accuracy. Since lifters can accurately estimate RIR, it can be used for prescribing and tracking intensity.

These researchers previously conducted a similar experiment on a smaller group of male bodybuilders performing the back squat and bench press (1). However, in the present study, they set out to determine the accuracy in a larger, mixed-sex group with varied levels of training experience performing machine leg and chest press. They hypothesized RIR accuracy would be greater when closer to failure. Additionally, they hypothesized accuracy would be greater among more experienced lifters, and would not be influenced by sex or exercise type.Subjects and Methods

The participants performed 1RM tests, and 48 hours later performed multiple sets of 10 repetitions with 70% and 80% of 1RM on the chest press and leg press, respectively. These 1RM percentages were chosen as they resulted in performance of ≤ 20 repetitions in pilot testing.

After completion of each set, participants stated how many more RIR they believed they could perform. Participants continued performing sets (to a maximum of 10) until they couldn’t complete at least 10 repetitions in a set. Findings

Actual RIR after completing the prescribed 10 repetitions on both chest and leg press – for men and women – ranged from 0 to 10. Combined leg and chest press
analysis revealed there was greater accuracy estimating RIR the closer to failure one was. Additionally, participants more accurately assessed RIR with chest press compared to leg press, and males were more accurate than females. Finally, resistance training experience did not impact accuracy (the p-value was low, but not quite down to 0.05).

The difference in accuracy between sexes was relegated to leg press, and furthermore, only existed when estimating RIR if there were 4 or more actual RIR. Meaning, when there were 0 to 3 actual RIR on the leg press, males and females estimated RIR with the same accuracy. 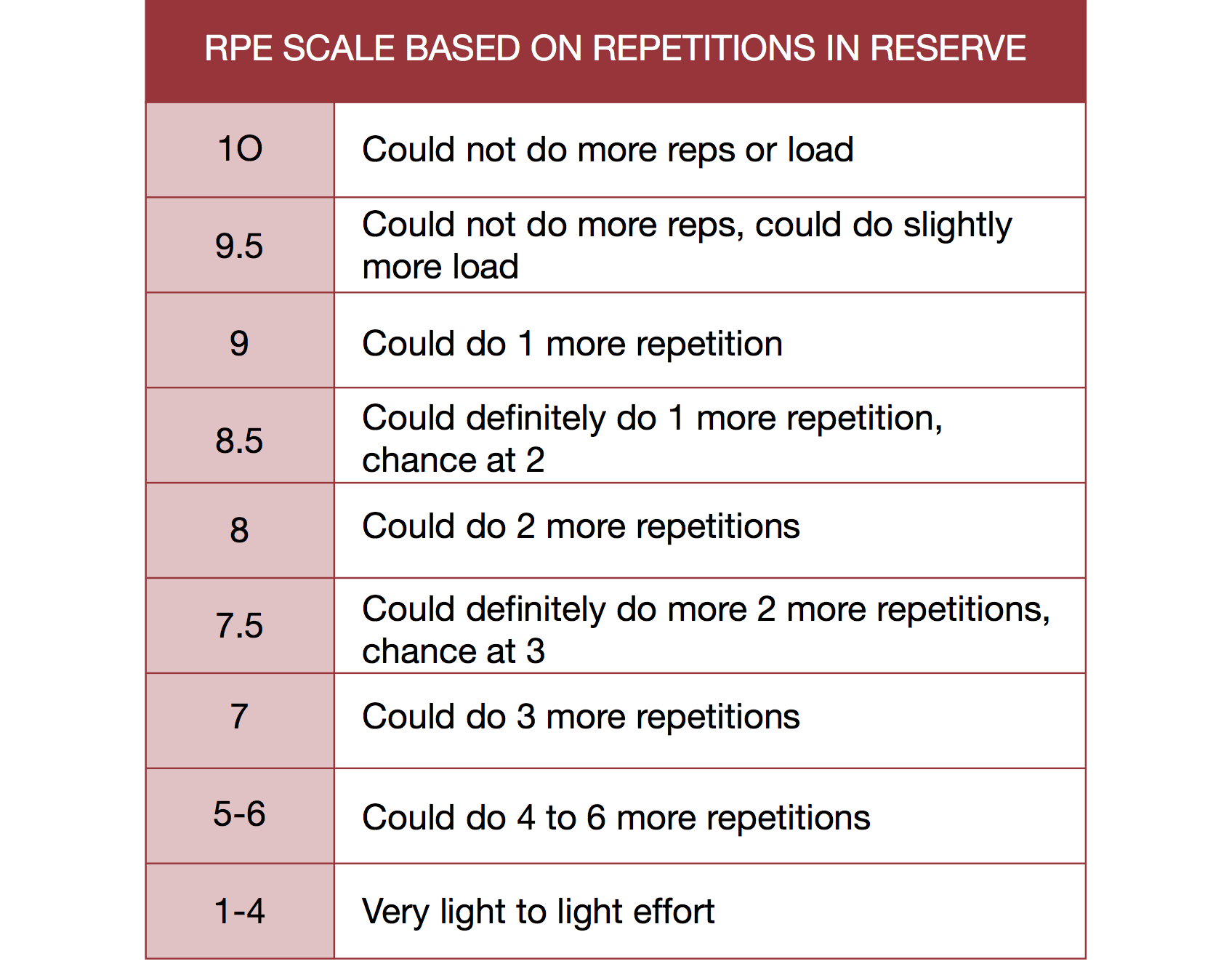 This study is the most direct measurement of RIR accuracy to date. While Dr. Zourdos and I validated an RIR-based RPE scale with velocity (see figure above), showing higher RPE scores (indicated by fewer RIR) correspond to decreases in bar velocity (2, 3), we did not directly measure actual versus estimated RIR. Hackett and colleagues were the first to do so in 2012 (1). However, their 2012 study primarily presented accuracy with correlations between actual and estimated RIR. This 2016 study presents data in a clearer way, showing where breakpoints in accuracy occur and the degrees of under- and overestimation.

In contrast to the recent study by Zourdos and colleagues, which reported novice lifters as less accurate than experienced (2), Hackett found RIR accuracy was not influenced by training experience. However, the p-value of the difference between novices and experienced lifters was 0.134.

P-values are statistics that estimate the likelihood findings are due to chance. Meaning, the difference in accuracy between inexperienced and experienced lifters only had a 13.4% chance of being random statistical variation.

In contrast to another recent study on RIR-based RPE differences in powerlifters that Dr. Zourdos and I published, Hackett and colleagues found greater accuracy in the chest press compared to the leg press. However, we found no differences in RPE among the squat, bench press, or deadlift (3).

Hackett et al. proposed that greater accuracy in the chest press may be due to a higher sensory organ density in the upper versus the lower limbs (4). They also point out that this may be the reason women were less accurate only in the leg press, as males have a higher sensory organ density in the lower body (4). While plausible, it is also possible that the greater perceived effort of going to failure during lower body versus upper body exercises (5) resulted in participants having less prior experience going to failure on leg press than chest press. To explain the sex difference, perhaps societal differences in male versus female lifting culture (the “go hard or go home” mentality) encourage men to push themselves to failure more regularly on leg press, thus better developing their awareness of RIR. This may be why we found no difference in RIR-based RPE among powerlifters performing upper and lower body exercises, while Hackett did.

Interestingly, the authors address the utility of the RIR-based RPE scale that Dr. Zourdos and I study (see figure on previous page), which was originally developed by powerlifter and coach Mike Tuchscherer in 2008 (6). They state this scale is not intuitive, as RPE and RIR are inversely related, adding an unnecessary layer of complexity by forcing the user to translate RIR into an RPE. I don’t completely disagree with this notion. However, this is easily alleviated by allowing participants to report whichever they are most comfortable with, either RPE or RIR. Then, the investigator confirms the opposite to ensure understanding. For example, when a participant completes a set, we show them the scale and they are free to state “I had 2 repetitions remaining.” At that point we confirm “so an 8 RPE?,” or vice versa.

Additionally, the RIR-based RPE scale has some advantages over reporting raw RIR. In the initial study introducing the scale, novice and experienced lifters worked up to a 1RM, using the scale to determine when it was achieved. Specifically, if an RPE less than 10 was called, an increase in load was made on the subsequent set. If the attempt was missed, the participant was “stuck” with an RPE less than 10. Novice lifters were “stuck” with an average RPE of 8.96, while experienced lifters achieved a 9.8 (2). An average RPE of 9.8 was due to a large proportion of lifters achieving 9.5 RPE scores in attempts leading up to their final, then making small jumps to try to reach a 10 RPE. Thus, it seems experienced lifters can tell with more accuracy than novices when they are less than 1 RIR from failure. This shows the value in having a scale which allows 9.5, 8.5, and 7.5 values, especially considering that the data from the current study by Hackett show similar accuracy when 0-3 RIR remain.

In fact, the structure of the RIR-based RPE scale is supported by Hackett’s findings. Half-point RPE scores are not used below an RPE 7 (RIR 3). Rather, RPE 5-6 represents 4-6 RIR, while RPE values below 5 are given subjective terminology indicating effort. This aligns well with the present findings, considering accurate estimations are difficult when greater than 3 RIR remain. With that said, RPE scores below 7 still have utility. As we proposed in a recent review article, when explosive lifting far from failure is the goal (i.e. velocity dominant power training), if the lifter feels they can accurately gauge RIR, the load is too high or too many repetitions are being performed with that load. Thus, an “RPE cap” can be used for power training whereby 1-6 RPE values can be used depending on whether force (5-7 RPE) or velocity (1-4 RPE) dominant power training is the goal (7).

At this point, thanks to Hackett and colleagues, the accuracy of RIR as a measure of resistance training effort has been well established. The next step is to conduct training studies in which resistance training intensity is prescribed with an RIR or RIR-based RPE value and compare that to a traditional model of training using percentage 1RM to see if there is any advantage or disadvantage to doing so. Furthermore, based on my anecdotal coaching experiences, certain personalities are better suited to gauging RIR than others. Thus, future research should strive to determine how to identify which individuals are suited to using this method of gauging effort in training and which individuals are not.