Is it More Important to Train to Failure with Light Loads?

High-load versus low-load training and the effects of proximity to failure on muscle growth are two subjects we’ve covered in MASS before (one, two, three, four, five, six, seven, eight, nine, ten). They’re relevant to the MASS readership, however (especially proximity to failure), and it seems like they’re the subject of a hefty proportion of training studies that have been published in the past few years. So today, dear reader, we’re looking at these topics once more. The presently reviewed study (1) is interesting, however, because it addresses both topics at once.

The purpose of this study was to compare the effects of intensity and proximity to failure on muscle growth and strength gains when equating for volume load.

25 subjects completed the study. They were all 19- to 34-year-old males who were active, but who had not performed any resistance training for at least 6 months prior to the study.

Before and after eight weeks of training, subjects tested their unilateral knee extension 1RM with both legs, and quadriceps cross-sectional area at the midpoint of the thigh was assessed using MRI.

The subjects were randomized into two groups: One group performed unilateral knee extensions with 80% of 1RM, and one group performed knee extensions with 30% of 1RM. Furthermore, each subject’s legs were randomized into two conditions: one leg trained to failure, and the other leg matched volume load but trained shy of failure. For the failure conditions, subjects simply performed three sets of unilateral knee extensions to failure, with two minutes between sets. Then, the researchers calculated the average number of reps per set, and the subjects completed 60% as many reps per set on their non-failure leg (still with two minutes between sets) until they equated volume load between legs. So, for example, if a subject performed 12 reps on set 1, 10 reps on set 2, and 8 reps on set 3 with their failure leg, they performed 30 reps in total, averaging 10 reps per set. Then, on their non-failure leg, they’d perform sets of 6 reps until they’d equated volume load (sets x reps x load) between legs. Depending on the strength differential between legs, that means the non-failure leg performed either 5 sets (if the non-failure leg was stronger or if both legs were of similar strength) or 6 sets (if the failure leg was stronger), with the 6th set only consisting of a couple reps. Subjects rested for two minutes between sets, and trained twice per week.

30 minutes after each training session, subjects were asked to provide an effort-based rating of perceived exertion for each leg using a 0-10 scale (where 0 is no exertion whatsoever, and 10 is maximal exertion). 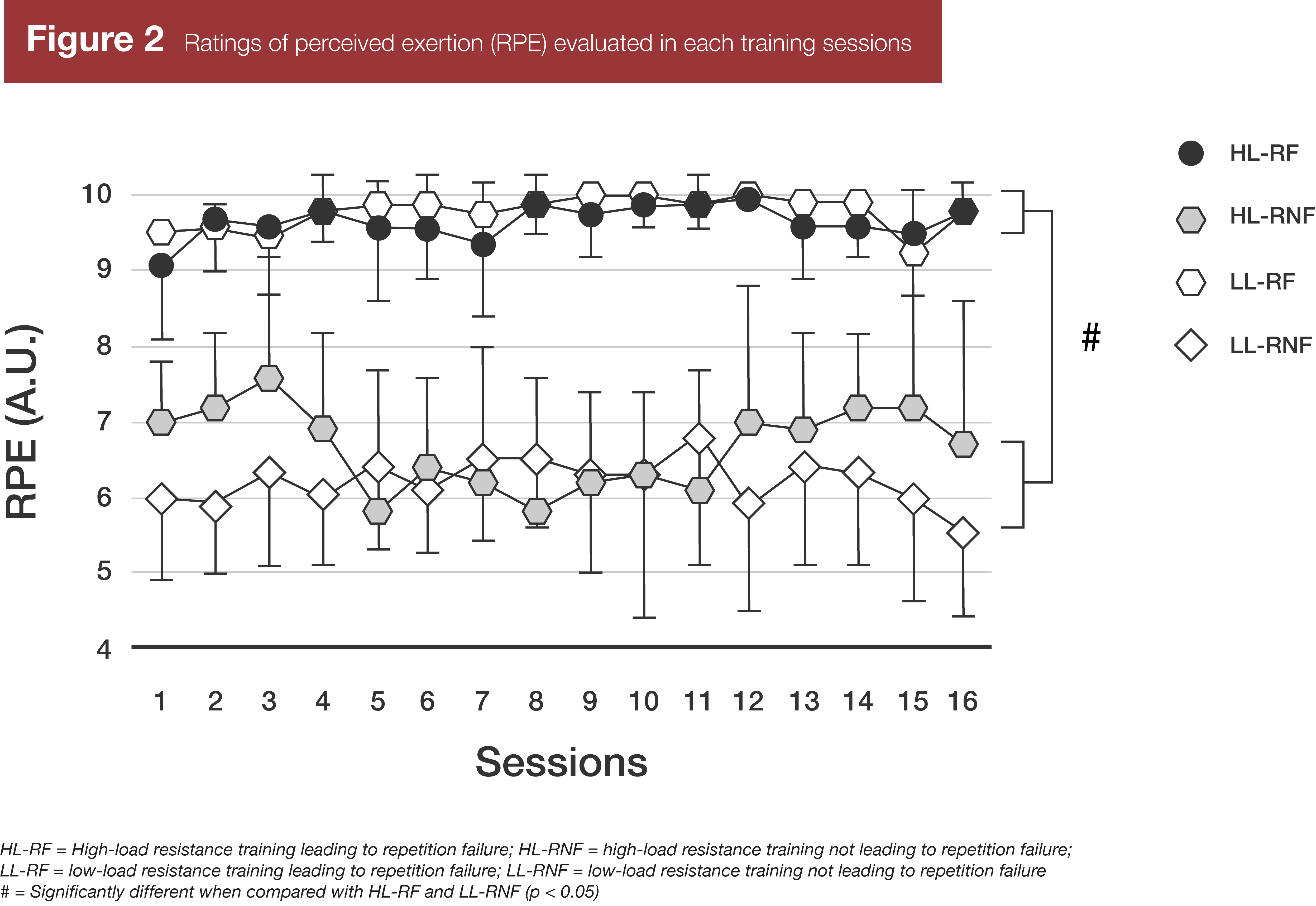 At least a dozen times (conservatively) over the past ~5ish years, I’ve seen studies claim that it’s not necessary to go to failure when training with higher loads (>60% 1RM), but that you must train to failure if you want to experience robust hypertrophy with low loads. Without looking too hard at the literature, that seemed to be a reasonably well-supported finding. There were quite a few studies showing similar hypertrophy between high-load and low-load training when sets were taken to failure, and there were also studies showing minimal hypertrophy with non-failure low-load training (2, 3). Case closed? Far from it. In the non-failure studies with low-load training, the low-load groups didn’t just stop sets shy of failure. They stopped sets way shy of failure. Low-load groups weren’t being instructed to leave, say, 2-5 reps in the tank; they were leaving 10+ reps in the tank. Thus, there hasn’t been a true comparison between challenging-but-non-failure low-load training and challenging-but-non-failure high-load training. I was hoping this study (1) would provide some clarity, but alas, it did not.

In this study, once again, the low-load group trained way far from failure. On paper, it looks like they stayed about 15 reps from failure. In practice, it was probably closer to 20 reps. The failure condition averaged 34.4 reps per set, but since they took each set to failure, they almost certainly performed more reps during their first set, perhaps performing 41 reps on the first set, 34 on the second, and 28 on the third, or something of that nature. Sets with at least 15+ reps in the tank are unlikely to cause significant fatigue, so the low-load non-failure condition in this study likely had at least 15-20 reps in reserve on each set. So, we now have even more evidence that training with a whole heap of reps in reserve isn’t ideal for hypertrophy, but we still don’t know if you absolutely have to train to failure to maximize hypertrophy with low-load training, or whether you’re fine leaving a reasonable number (i.e. <5) of reps in reserve.

The more interesting results of this study, to me at least, were those obtained in the high-load group. Much like the low-load group, the mean number of reps per set in the failure condition likely underestimates the number of reps the subjects could perform when fresh. Rather than doing 12.4 reps per set, it was probably something closer to 15, 12, and 10. So, since the non-failure group, again, likely accrued little fatigue per set, they were probably training mostly at 7-8+ reps from failure. Thus, it’s incredibly striking that hypertrophy was similar between high-load conditions. As I detailed on Stronger By Science, thus far, the literature has largely supported training to failure for untrained lifters, but not for trained lifters. This is the first study on untrained lifters where training this far from failure led to similar growth when compared to going to failure. It’s not a totally fair comparison (at least if you’re interested in comparing things on a per-set basis), because the non-failure group did a couple more sets (4). But still, I was surprised that hypertrophy was similar between conditions. And if I’m being honest, I don’t have a good explanation for it. This study (1) is comparable to a prior study by Goto and colleagues which also used knee extensions (5). Subjects performed 3 sets of 10 to failure on one leg, and 3 quasi-cluster sets of 10 reps on the other leg, not to failure (they did 5 reps, rested 30 seconds, and did 5 more; proximity to failure wasn’t reported, but they likely had 3ish reps left in the tank at the end of the second mini-set each round). The group training to failure experienced way more quad hypertrophy. I guess it’s possible that the two extra non-failure sets in the present study were sufficient to equalize the stimulus, but … that strikes me as unlikely. If I’m being honest, this result is interesting, but it leaves me scratching my head. I’m comfortable with the idea of still maximizing hypertrophy while staying 2-3 reps from failure, but I’m not sure I’m comfortable with the idea of still maximizing hypertrophy with 7 reps in the tank. I’ll chalk this up to a possible false negative for the between-conditions comparison that I’d really want to see replicated.

This was basically two studies in one. The low-load results were right at home in the literature, while the high-load results really caught me off guard. Since the high-load results were so out of place, I’d want to see them replicated before they move the needle much for me in terms of recommendations. For single-joint training, since it causes so little systemic stress, I don’t see a point in not training to failure, or at least very close to it. For multi-joint training, I think you’re generally fine to leave 2-3 reps in the tank for hypertrophy. Future research may show I’m being too conservative (or too aggressive, depending on how you view it), but I do think that, in general, sets need to be “hard” to maximize muscle growth, which means at least getting fairly close to failure.

In the interest of making sure the range of opinions of the MASS crew is heard: Mike and Eric Helms weren’t surprised by this finding, while I was. Eric hypothesized that there might be a load threshold at which point RIR matters less for hypertrophy, as motor unit activation starts high from the very beginning of each set. Mike thought that the effect of repeated sets reasonably accounted for the similar hypertrophy between groups. There is mixed data, so none of us can say for sure as to what is the true physiological reality. Personally, I think the lack of difference between the high-load failure and non-failure conditions in this study is a false negative, while Mike and Eric lean toward it being representative of what actually happens. Ultimately, we won’t have consensus until more data is published.

Honestly, I’d just like to see the high-load results from this study replicated, ideally with an exercise more relevant to strength/physique trainees than unilateral knee extensions. It would be really cool to learn that 5 sets of 7 squats, for example, build the legs just as well as 3 sets to failure averaging 12 reps per set. I suspect that the three sets to failure would cause more growth, but I’ve been wrong before, and I’m sure I’ll be wrong again.

While this takeaway contradicts the results of the present study, I don’t think you need to train to failure to maximize hypertrophy, but I do think you should generally be within about 2-4 reps of failure. And to maximize strength gains, obviously heavier loads are generally better, at least in the short-to-moderate term.