How Are Female Physique Competitors Impacted By Contest Preparation?

Most natural bodybuilding publications are case studies or on males. This new study explores how women respond to contest dieting.

Compared to how often diets in overweight and obese women are investigated, the longitudinal effects of weight loss regimens on healthy-weight, athletic women are rarely studied. In this study, 50 healthy, normal-weight women were organized into two groups based on whether or not they were planning to compete in a local drug-free physique competition. Thus, 27 competitors were compared to 23 weight-stable controls three times: before the start of their diet, after the conclusion of their diet, and 3-4 months after their diet. Members of the control group’s training, nutrition, body composition, body mass, and hormonal profile remained stable. Competitors maintained protein intake while decreasing carbohydrate and increasing their volume of cardiovascular training. Competitors lost ~12% of their body mass, 35-50% of their body fat, a small amount of total body lean mass, a small amount of quadriceps muscle mass, and experienced more menstrual cycle irregularities coinciding with decreases in estrogen, testosterone, triiodothyronine (T3), and leptin, relative to controls. After energy intake, cardiovascular training, body weight, and fat mass rebounded to (or nearly to) baseline following the recovery period, all hormones returned to normal except for T3 and testosterone.

The researchers set out to conduct a study of female physique competitors at key time points, using a large sample size, comprehensive data collection, and a control group to provide a physiological, psychological and performance profile of what occurs during contest preparation and recovery in female competitors. The authors hypothesized the competitors would be successful in losing predominantly fat versus muscle, that they would experience hormonal adaptations that would be considered unhealthy if maintained long term, and that their hormonal profile would return to normal after the recovery period.

Table 1 summarizes the changes in performance and body composition, as well as psychological and hormonal changes after dieting, then after recovery. Changes are listed in the table if a difference was found relative to the baseline testing, or relative to the control group (or both) in the competitors. 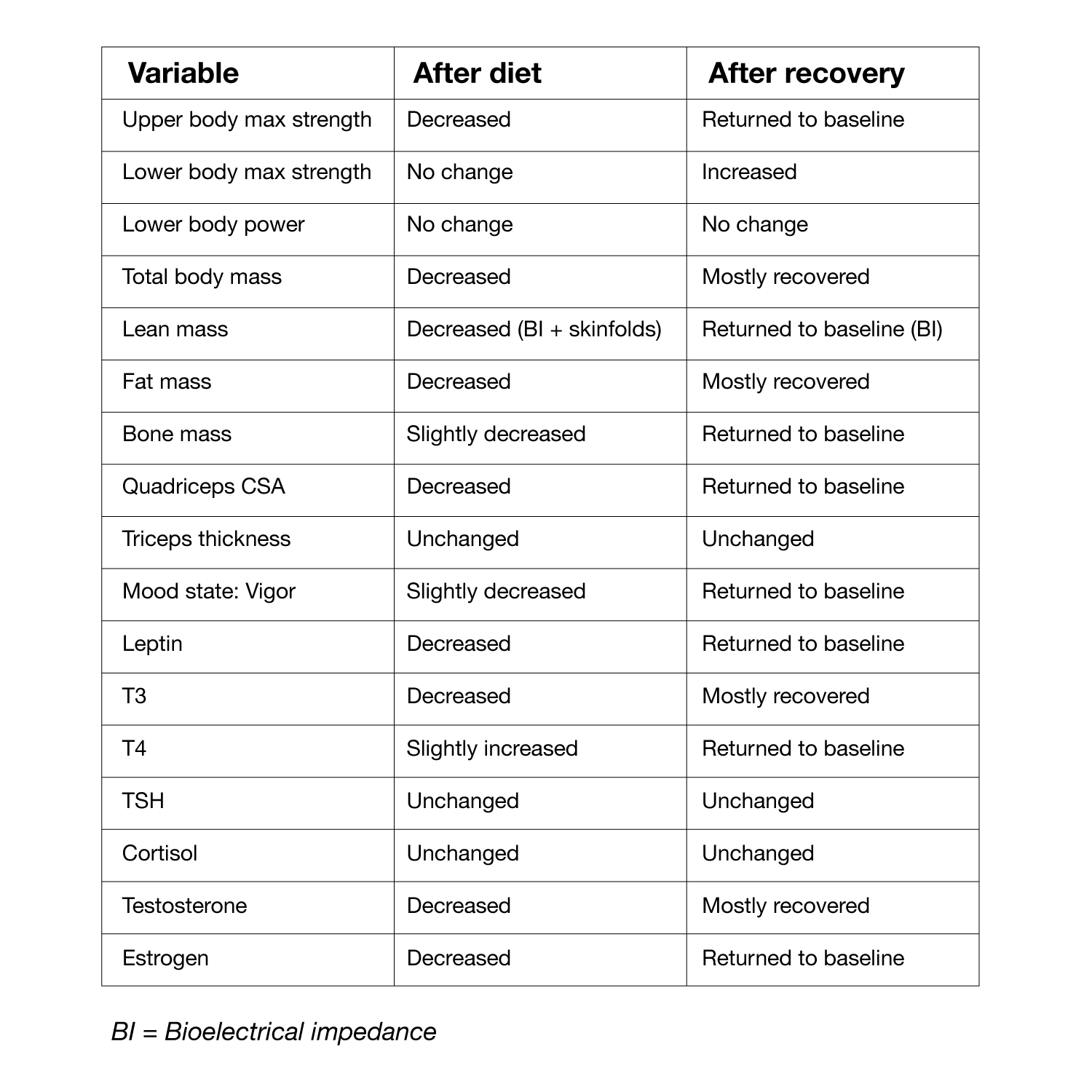 Systolic blood pressure, heart rate, and hematocrit and hemoglobin levels decreased after dieting and returned to baseline after the recovery period.

Table 2 shows the average energy and macronutrient intakes, as well as resistance exercise (RE) and cardiovascular exercise (CE) frequency values, at the start and end of the study for controls, and during the diet and during recovery for competitors. Diet variables for nutrition are the average for the entire period, while training frequency for the diet period is represented by the number of sessions performed in the week prior to the week of the competition.

Bodybuilding studies are rare. Natural bodybuilding studies are rarer. Studies on natural female bodybuilders are the rarest. For that niche, this study is the largest in scope and depth I’ve ever seen. To provide perspective, most studies on drug-free competitors are case studies, mostly due to the difficulty recruiting an adequate sample (1, 2, 3, 4, 5, 6). An upside to case studies is that you can collect more data over longer periods, but you don’t know if the data represent the larger population. The most recent group-study of female physique competitors (in 2001) compared five controls to five drug-free bodybuilders over 12 weeks prior to competition and reported resistance and cardiovascular training and body composition data (7). In comparison, the present study has five times the subjects, and they collected nutrition, training, performance, body composition, hormonal, psychological and health data at a level typically only seen in case studies.

It’s worth noting the participants in this study were recruited across the spectrum of competitive divisions. While division names differ by country (this was a Finnish study), this means the participants were aiming for different levels of leanness and muscularity. Thus, the researchers provided individual data for certain variables. In Figure 1, you can see the spectrum of body composition change. 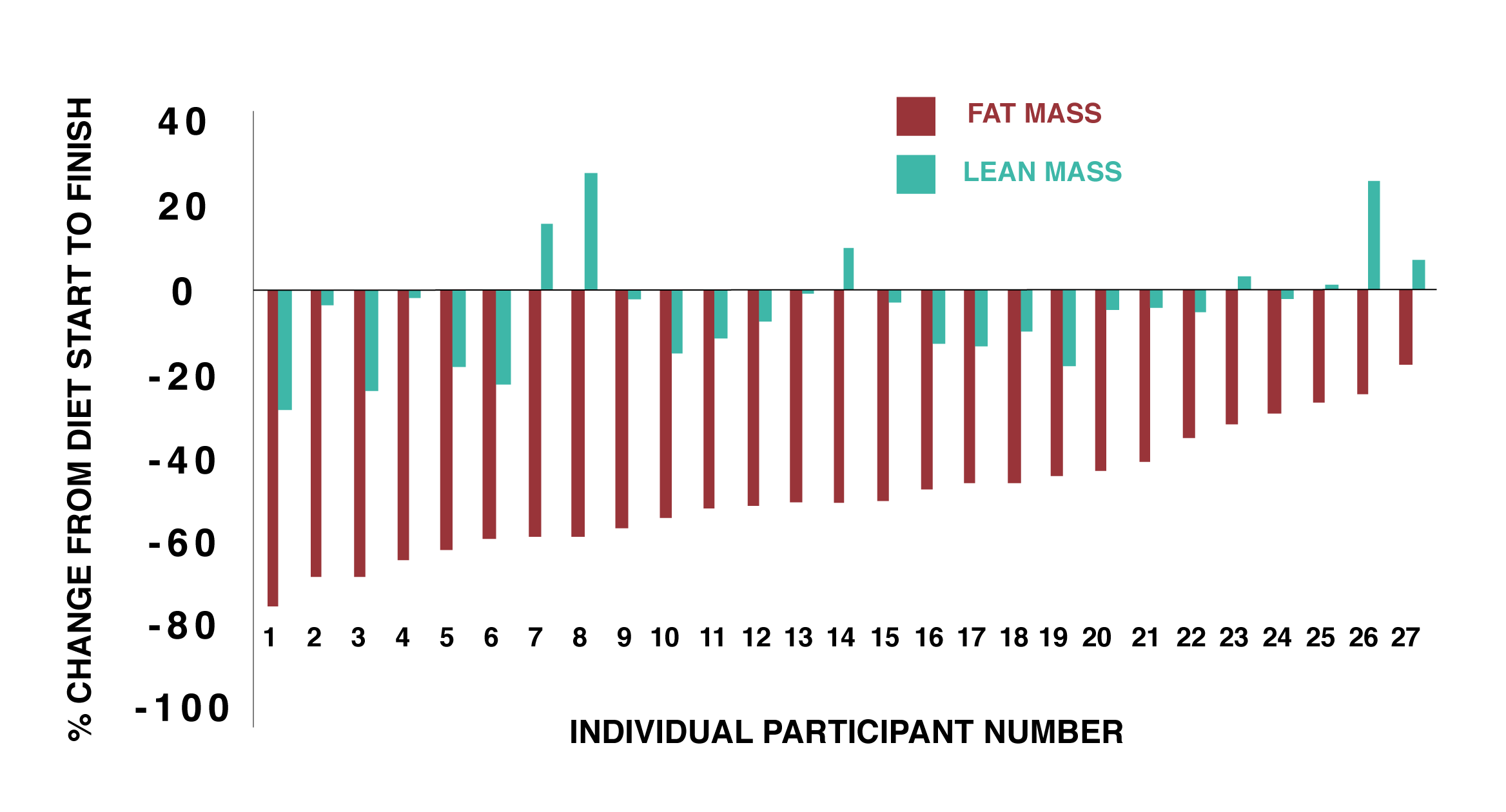 Typically, the competitors who lost the most fat also lost the most muscle. Likewise, the competitors who lost negligible amounts of muscle or even gained muscle typically lost less fat. The exceptions are likely due to participant training age. While all were required to have lifted weights for 2 years, some had done so for longer. For some, this was their first competition season, for others, their fourth. A novice with a low training age, good genetics, and a solid approach can lose substantial fat and gain muscle during prep (especially if they are in a division that doesn’t require extreme leanness). It’s not common, but I’ve seen it in practice, and these data reflect this variability among individuals. I also suspect the minor mood state changes compared to other studies on bodybuilders (in one case study, a bodybuilder’s stress score increased seven-fold [6]) were because 17 of the 27 participants were bikini competitors and didn’t have to achieve extreme leanness.

The main changes are unsurprising. Performance and muscle mass were negatively impacted to a minor degree while a great deal of fat was lost. This is unsurprising because, for the most part, the competitors adhered to the main tenets of current nutrition “best practice” (8):

Simply losing weight at a slower rate (which requires a longer diet) makes a big difference for lean mass and performance preservation (10, 11). Additionally, high-protein diets are beneficial for maintaining lean mass (12) and satiety (13).

With that said, while there isn’t yet consensus on the minimum threshold for protein to optimize lean mass retention, there is consensus that it falls in the range of 1.8-2.7g/kg (or similarly between 2.3-3.1g/kg of lean mass) (12, 14). The competitors in this study were a fair bit above the upper limit of this range at 3.1g/kg of bodyweight. With more calories this wouldn’t matter, but when in caloric restriction, those excess protein calories can be better spent. There is an interesting quote in the study:

“[the participants ate] a quick standardized low-fat breakfast (a protein-drink, a protein bar and a medium-sized apple/banana: in total ~47–48 g proteins, ~72–80 g carbohydrates, ~6 g fat)…The breakfast was especially important in the measurements after the diet since some of the participants were in a large energy deficit and potentially not able to perform, for example, muscle strength testing in a reliable and safe manner.”

If the researchers felt it necessary to feed the participants 60% of their average daily carb intake in a single meal prior to strength testing so it was safe and reliable, that tells me taking protein down to 2.2-2.6g/kg and putting those calories into carbohydrates probably would have helped some of the participants train more effectively and potentially retain more strength and muscle mass.

On the training side of things, simply lifting with effort, some structure, and being progressive (a safe assumption for most competitors) ensures most benefits of resistance training are conferred. With that said, there was room for improvement. Like most bodybuilders (15), everyone in the study used split routines. There is nothing inherently wrong with that; however, it is well-established that spreading volume per body part over more sessions by training muscle groups at least twice per week increases rates of hypertrophy (16).

This can be achieved with a split routine (i.e. an upper/lower or a chest, back and arms/legs and shoulders split, etc.), but that didn’t occur. Looking at Table 2, it’s safe to say based on the standard deviations that the majority trained most muscle groups once per week, with only some muscle groups trained twice (mainly in the case of the lower body).

Regarding cardiovascular training, it wasn’t excessive compared to what I’ve seen in practice. At its peak, they performed a similar number of resistance and cardio sessions. On average, cardio energy expenditure ranged from 40-50% of what they expended through resistance training. Engaging in too much cardio at a moderate intensity (what would classify as endurance training) can “interfere” with resistance adaptations and lessen local hypertrophy caused by lifting (17). All participants performed either high-intensity interval training (HIIT) sessions only (15-45 second intervals followed by 30-60 seconds of recovery for 15-25 minutes), or HIIT in combination with low-intensity, steady-state sessions. Theoretically, because HIIT shares metabolic and contraction-intensity similarities with resistance training, it should produce less interference (17). However, it doesn’t always play out this way in every study, as it is more complicated than that. Specifically, HIIT is also very fatiguing and from personal and coaching experience, has a high potential to negatively impact subsequent lower body training (note that muscle mass was only lost in the legs). One solution is to perform very low-intensity, steady-state cardio at an intensity below what causes endurance adaptations (and thus interference). It isn’t time-efficient like HIIT, but it doesn’t have as large of a recovery component and can be a good adjunct if HIIT becomes fatiguing.

The physiological adaptations seen in this study give us a better idea about the average response to competition dieting in women. For example, in a recent case study of a female competitor, testosterone and estrogen did not drop in response to dieting while TSH did (3). In the current study, however, testosterone and estrogen decreased while TSH remained stable. In another case study, a female competitor did not have her menstrual cycle return for a year and a half after the competition (1). In contrast, in the present investigation, the majority (but not all) regained menstrual cycle regularity 3-4 months post-diet. Interestingly, menstrual cycle irregularities occurred in all five participants not using birth control. Considering the drop in estrogen due to dieting, it makes sense that taking exogenous estrogen could help to maintain menses. However, it is important to note that certain oral contraceptives may negatively impact the hypertrophic response to resistance training (18).

Importantly, testosterone, T3, and menstrual cycle regularity (in some) did not fully return to baseline. At the same time, neither did body mass and body fat. I don’t think this is a coincidence. It is common for competitors (especially women, in my experience) to try to maintain as lean of a physique as possible post-competition. It is hard to watch your hard-earned conditioning fade away, and from a purely logical (albeit overly reductionist) perspective, you can convince yourself that staying leaner will help your next competition because it should make dieting easier. However, it’s easy to throw the baby out with the bathwater. Having suppressed T3 and testosterone levels over the long run is suboptimal for muscle mass gains and metabolic rate, which are critical to future diets, and more importantly – health. Psychologically, a level of leanness resulting in suppressed hormones may coincide with food preoccupation and a higher risk of disordered eating (8). So, make sure you get back to a healthy body fat where you can sit comfortably without being food-focused. In my experience, this coincides with a body-fat level where you can also progress in the gym and you are healthy internally.

If there was anything I would like to see in addition to this great data, it would be correlational statistics. Given the large sample size and diversity of individual responses, it would be interesting to see correlations between energy intake and body composition with hormonal response, and energy intake and body composition with mood state. These relationships would help us understand to what degree adaptations are due to the process (decreasing calories and increasing energy expenditure) or the consequence (achieving extreme leanness) of contest preparation. In turn, this might help us develop strategies to minimize the downsides of dieting in the short and long term.