Does Stretching Before a Workout Decrease Muscle Growth?

A lot of lifters still do traditional static stretching before they lift. Is that robbing them of some gains?

Most lifters still perform static stretching before they lift, or, at least, they think they should stretch before they lift. However, there are plenty of studies showing that stretching can acutely decrease power output (though the magnitude of the decrease is often exaggerated [2]). Furthermore, a couple of studies show that stretching can decrease the number of reps you can do with a given load, at least when you lift immediately after stretching (3, 4). Since hypertrophy and strength gains are strongly influenced by training volume (5, 6, 7), we may assume that stretching before lifting would decrease rate of muscle growth and strength gains.

However, while studies had shown acute decrements in performance when stretching was performed immediately before a high-force or an explosive task, only two studies had actually examined the long-term effects on performance. One (8) found that untrained women who stretched immediately before lifting increased their 10RM just as much as women who didn’t stretch before training. However, another (9) found that in trained women, stretching immediately before lifting led to smaller 10RM increases. So, the prior literature on strength gains was conflicting, and no study had yet investigated the effects of stretching immediately prior to lifting on hypertrophy or 1RM strength. Therefore, this study set out to test whether static stretching directly before resistance training would negatively impact rates of hypertrophy and strength gains.

Over 10 weeks of training, untrained subjects trained one quad without stretching first, and trained the other quad immediately after a pretty intense stretching session. The unstretched quad grew more, knee range of motion increased more on the side of the stretched quad, and strength gains were similar between legs.

This study had four major questions:

The subjects were nine untrained males, mostly in their 20s. Because of the small number of participants, this study used the subjects as their own controls to increase statistical power, opting for unilateral (i.e. single leg) knee extensions as the exercise to be trained and tested.

RT involved 4 sets of unilateral knee extensions to failure with 80% 1RM with 90 seconds between sets, twice per week. The strength training portion of the FLEX-RT was identical. However, before lifting, the leg assigned to the FLEX-RT protocol had partner-assisted quad stretches (lying face-down, with one of the researchers pushing the participant’s heel toward their butt) performed on it for 2 sets of 25 seconds, with 60 seconds between stretches.

On a scale from 0 to 10 where 0 is “no pain” and 10 is “maximal pain,” the stretches were between an 8 and a 10. In other words, this was a very intense stretch. The first set of knee extensions started 30 seconds after the second stretch was finished.

The training program lasted 10 weeks. At week 5, they retested 1RMs to adjust the training load (i.e. they trained with the same load for the first 5 weeks, and a heavier load for the second five weeks, and simply tried to increase the total number of reps each week).

Ten weeks later, just before the start of the training intervention, they repeated all of the testing (minus the familiarization sessions, and with only one 1RM test). All of the testing was performed twice to determine the test-retest reliability and average error of the measurements.

Total reps performed and total volume load (sets x reps x load) were about ~15-20% higher for RT than FLEX-RT. As predicted, stretching directly before lifting decreased training volume when doing the same number of sets, and taking all sets to failure (Table 1).

Mean number of repetitions and total training volume during weeks 1-5 and 6-10.

Data are presented as mean ± SD.

*Significant difference between RT and FLEX-RT. 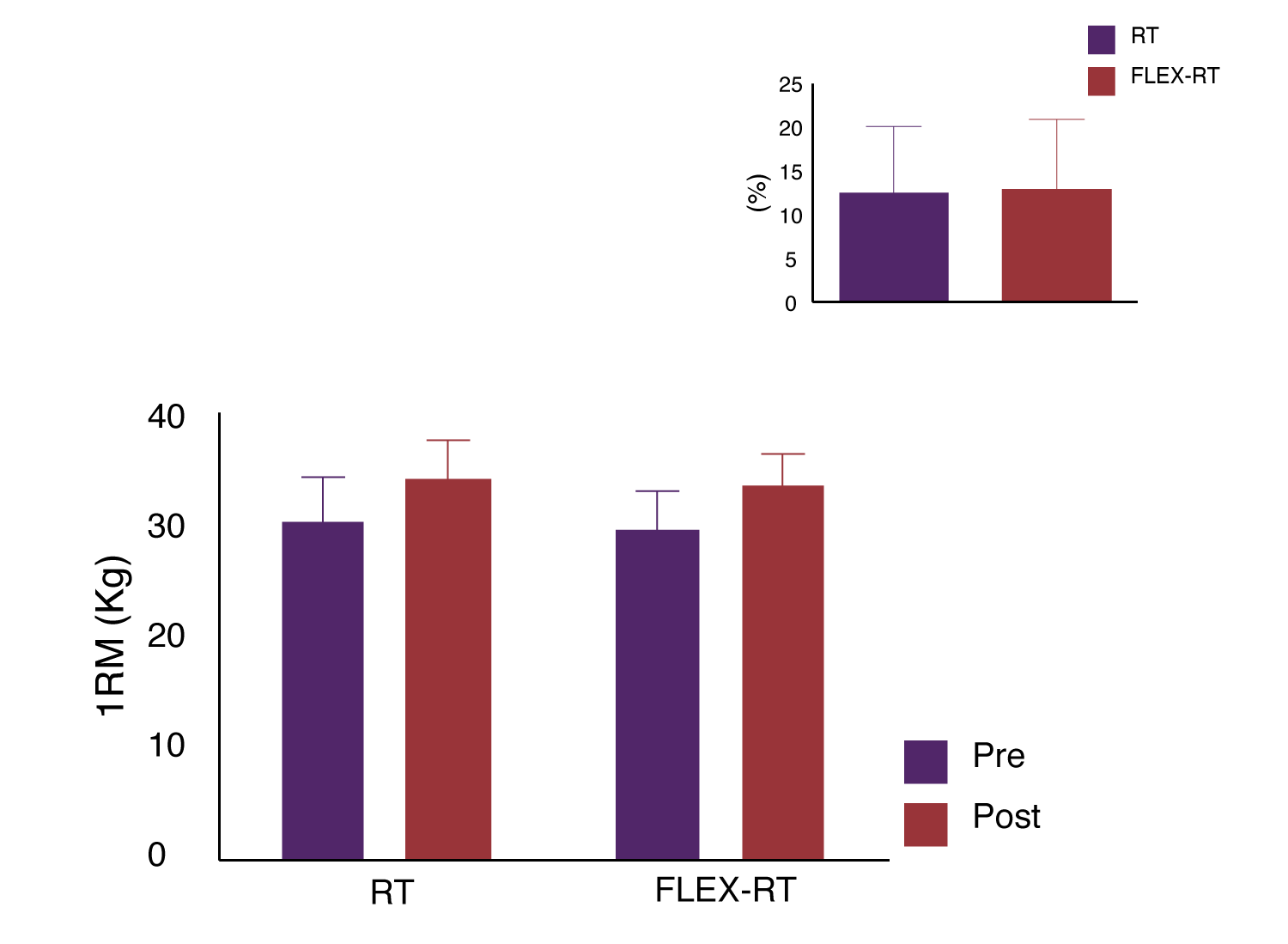 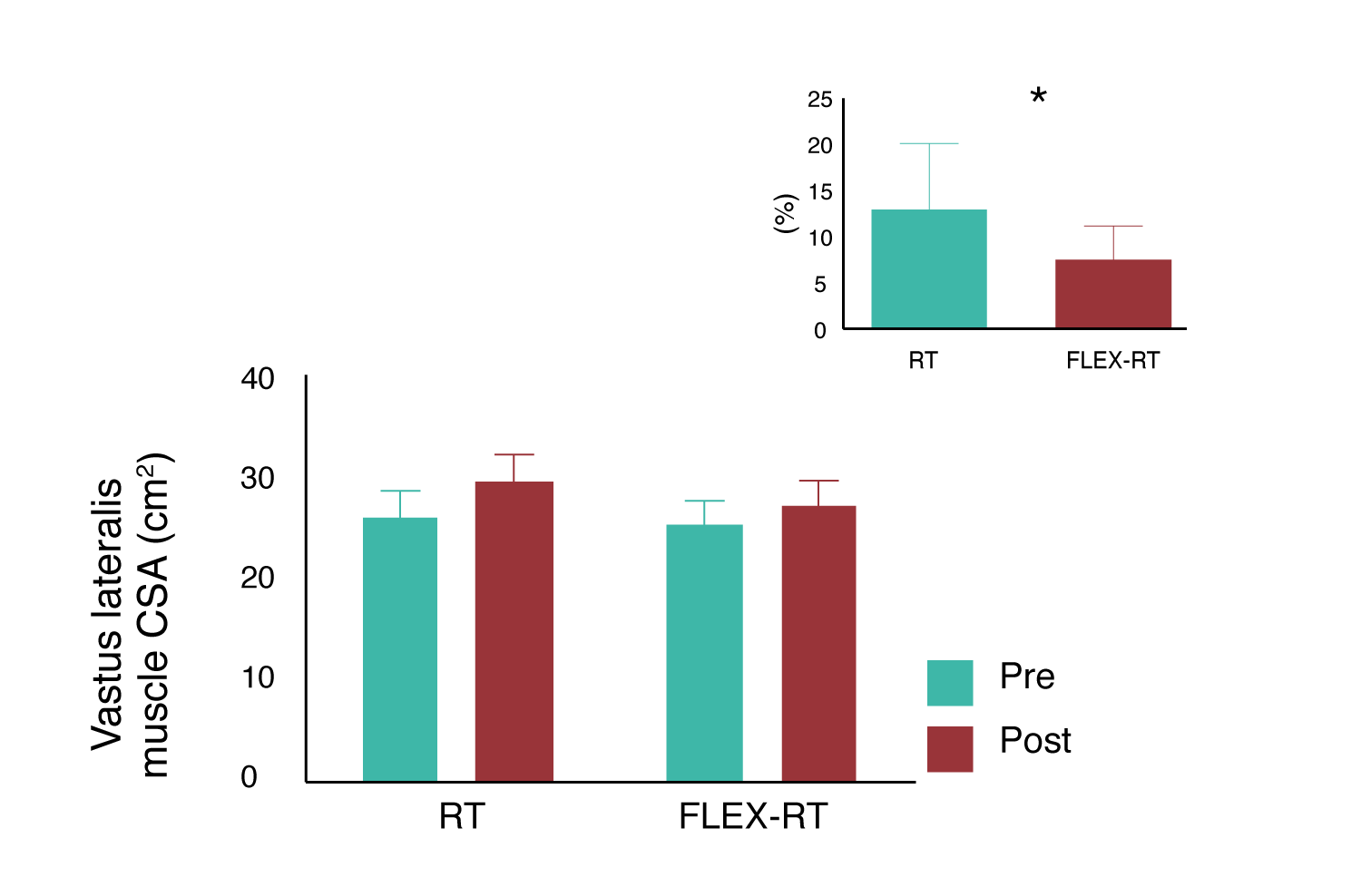 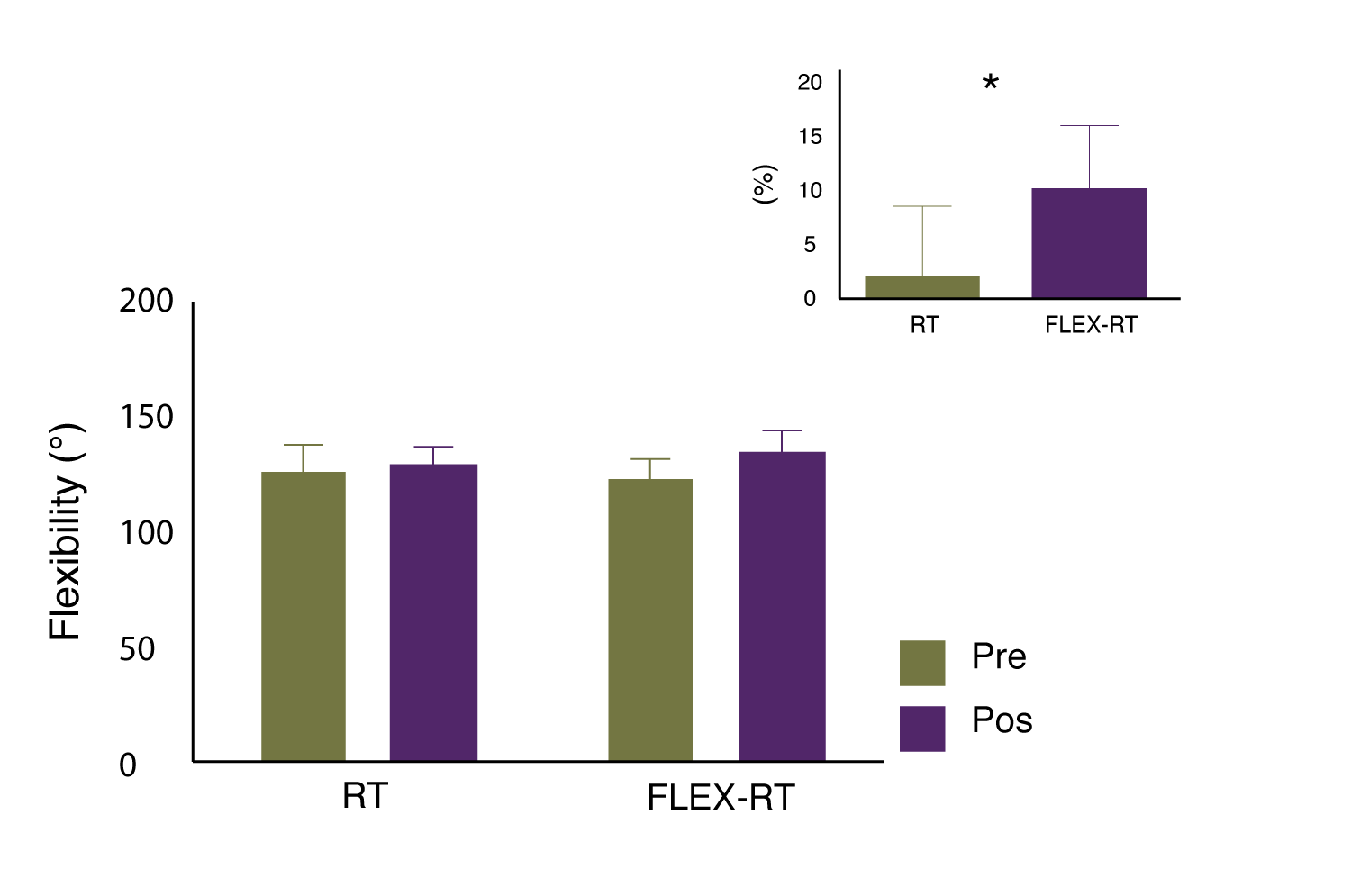 In this study, untrained males gained more muscle when they didn’t stretch before strength training. However, stretching was beneficial for gains in range of motion (again, duh), and it didn’t compromise strength gains.

Those are the basic takeaways, but there’s a bit more nuance to it than that.

Before you come away thinking that this study proves that stretching is bad for hypertrophy, but doesn’t affect strength, there are a few things to keep in mind:

1) The way hypertrophy was assessed. The researchers measured cross-sectional area of the vastus lateralis at the midpoint of the thigh. However, it’s possible that CSA at a single point in the muscle doesn’t tell the entire story for hypertrophy in this case. Plenty of research shows that different exercises can cause activation of different regions of a muscle and can result in differing hypertrophy responses in different regions of a muscle (10). Since we know stretching can acutely affect the mechanical properties of a muscle, it’s possible that stretching before lifting altered the way the stress was distributed throughout the muscle, perhaps affecting where hypertrophy took place. CSAs at multiple different regions or (even better) muscle volume would paint a more complete picture. Since training volume was lower after stretching, I do think it’s very likely that stretching decreased the rate of muscle growth, but I’d like to see the finding confirmed by a study that measured muscle volume instead of CSA at a single point.

2) When the stretching took place. This is the same limitation we saw with the concurrent training paper from the last issue. Static stretching immediately before lifting pretty reliably decreases performance (force, power, reps with a given load, etc.). However, at least for force and power output, we know that waiting 10 minutes between stretching and lifting (i.e. how long it would generally take to get up to your working weight for something likes squats or deadlifts) can undo those performance decrements (11), as can a dynamic warmup (12, 13). It’s possible (likely, I’d posit) that the decreases in training volume in this study may not apply in a real-world scenario … unless, that is, you warm up to squat, then stretch, then immediately start your first work set. Furthermore, stretching on its own was recently shown to independently cause hypertrophy (14), so it may be that stretching performed on off days or after training is actually beneficial for muscle growth.

3) The intensity of the stretching. The intensity of the stretching in this study may have played a larger role than the simple fact that stretching took place. The stretches only totaled 50 seconds in duration, but they were rated an 8-10 on a 0-10 scale where 10 is “maximum pain,” perhaps inducing an inhibitory, protective response that compromised performance. A recent review (15) found that stretches lasting less than 60 seconds tend to not meaningfully affect performance, so it’s striking to see such a marked acute decrease in performance here.

4) Cross-education. When you train one side of your body, the other side tends to get stronger as well (16). This is known as cross-education. The experimental protocol used in this study (unilateral exercise, with each person serving as their own control) is great for assessing hypertrophy: you can get plenty of statistical power with a smaller number of subjects, you can be very confident that your two “groups” are essentially identical, and cross-education doesn’t apply to hypertrophy (as it seems to be a local phenomenon). However, for assessing strength, the cross-education effect muddies the water. Maybe RT was better for strength gains, but the FLEX-RT legs got a boost from cross-education that wiped out the difference (or vice versa). On the whole, hypertrophy findings with this sort of design are very trustworthy (more trustworthy than using two groups of completely different people, I’d argue), but you need to take strength findings with a grain of salt.

As you should know from Mike’s presentation last week on the real effects of pre-exercise stretching, static stretching isn’t the best way to warm up for a workout. This study adds one more piece of the puzzle to support that conclusion: If you do it directly before training, it can compromise training volume and probably reduce the rate of muscle growth. However, static stretching can still have its place. It reliably increases flexibility and range of motion, and possibly even causes muscle growth of its own (14). However, if you’re going to do static stretching, you should save it for after your workout, off days, or you should do it far enough before training that it doesn’t negatively impact performance in your workout.

Future studies should examine different populations (i.e. see if these findings apply to well-trained lifters), use measures of muscle size that provide a fuller picture of muscle growth such as CSAs at multiple different locations or muscle volume, and test the effects of timing to see if stretching after a workout or on off days has different effects on strength and hypertrophy.